If you’re a voice actor, and live within driving distance of Toronto, you are in for a treat. The reasons you need to be at V.O. North are more than a chance to learn and grow at an industry specific conference in your own backyard; that you’ll get the biggest bang for your buck of any VO conference out there; that you’ll forge and cement friendships with voice over colleagues close by; and that you’ll get a better than bingo change at taking home craft, marketing or equipment prizes a voice actor at any level in their career would value. I took my voice over career to the next level through attending conferences. Although all are helpful, my favorite kind have been smaller (less than 200 people) with valuable content. 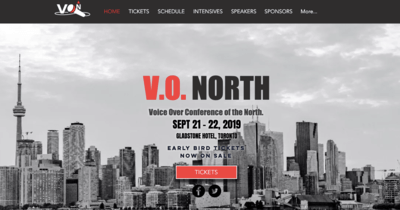 This two-day voice acting event happens September 21-22, at the Gladstone Hotel, a sweet art boutique hotel, in the epi-center of Toronto’s coolest neighborhood, Queen West. On a rainy Friday in a Zoom room, I chatted with the founder and (one half of) the team putting on V.O. North, Dervla Trainor.

Kim Handysides: Dervla, what moved you to create a voice over conference in Toronto?

Dervla Trainor: Last year I was in a professional development program where we had to take on a project that would benefit a community that we were involved with. I’m a voice actor myself who also happens to have a background in event production, and around that time I went to a voice over meet up hosted by agent Rob Hill. What struck me was that someone had driven in from Buffalo, someone came from Barrie, from Oshawa….people were driving hours just to come to this little meet up where there was no agenda. Just an opportunity to meet other voice actors. People are craving some sense of community, I guess cause we’re all sitting in our booths all day talking to ourselves, (we laugh). And I thought, why don’t I put all this experience into something bigger where they’re not just coming to chat, but they’re going to learn something, they’ll go away with valuable information.

Kim: You’ve been a voice actor for about five years, but what was your event planning experience in the past?

Dervla: I worked at a booking agency and at any given time we had about 150 shows on the books that I was personally handling, taking care of, monitoring ticket sales, monitoring social media announcements, the branding link…so I know at my core, how to promote an event, and how to get the word out there. I also worked at many high-profile events like the Much Music Video Awards, Toronto Fashion Week, CMT Music Festival to name a few, so I have a really good idea of how to put on a great event, combined with the marketing, promotion and branding side, too.

Kim: Last year was the first year of V.O. North. What made it work?

Dervla: I think that key was it wasn’t me saying “Dervla Trainor is hosting a fun day of learning” it was an event unto itself, with a proper website, logo, colors, and branding. And as I was organizing it, Tanya, my agent, who is now my business partner, sent me an email saying “V.O. North, come to my office let’s week, let’s talk about it.” And I thought, Uh-oh, this is like going to the principal’s office, am I going to get in trouble, am I doing something wrong? (we laugh again) So we got together at her office, she got out a notepad and said, “What can I do to help?” And I kind of went, “whew” not in trouble – this is cool she wants to help. And her input was that we want to make this a good first year and what makes a good first year is credible voice over speakers; people who are legitimately good at what they do, are respected in the industry and can provide valuable voice over advice. She said, “I know these people, I have the contacts, why don’t you let me curate panels?” Which was great. And I could concentrate on making the event fun, and running smoothly.

Dervla: Details. So, like last year making the green room for the speakers like a rock star green room with hospitality and treats and working with the people at the venue to make everything seamless. This year the event is two days, and I want every aspect to be an experience. So, even the venue itself is really important. At the Gladstone Hotel, every room is designed by a different artist, almost all of the staff work in the arts industry in some way or another, so they are excited to work with us and transform their space into whatever way suits us best.

Kim: I am SO looking forward to two days in the Gladstone, in such a cool part of Toronto. In what other ways is this conference unique?

Kim: Tell me more about the raffle.

Dervla: I love the raffles. Who doesn’t like free stuff? Your chance to win comes with the price of admission. So, we have a chance to win a full website redesign, J Michael Collins is giving one of his demo productions away, Shelley Avelino’s going to give away two coaching sessions, and there are many more prizes still to be announced. You have a really great chance of winning. We’re expecting between 150-175 attendees. The odds of winning are high, the prizes have great value, like a JMC demo is $2500. That’s worth the price of admission right there. So, the emphasis on fun. We’re voice actors. We’re weird and wild and wacky. Let’s keep the conference that way.

Kim: Love it! Ok, people can see on your website who you’ve got speaking. How are you offering the workshops? Do you have different streams? How’s that going to work?
Derla: Yes, there’ll be two main rooms. And then one smaller breakout room and then an intensive room. So, there’ll be four simultaneous programming avenues at each time. And we’re carrying the talks so that at any given time in your career, you prefer to go to one over the other. For example, if you’re a beginner voice over actor you’re going to want to go to VO 101. At the same time, we’ll offer something for people who’ve been in it longer. We have the exhibitor space as well. We have a few little surprises we want to present throughout the weekend, which I can’t share or that would ruin the surprise.  Another thing that I’ll be facilitating is helping set up accountability groups for people who are interested. So upon registration, you’d let me know you’re interested, I’d take names, years of experience, or years full time in the business and set them up with each other.

Kim: That is so helpful. I’ve been in an accountability group for over 4 years now and it has really helped me stay on track and grow my VO business. Fun! The conference is in September, we’re May…is there still time to buy Early Bird tickets?

Kim: I don’t know if American voice over artist realize what a great deal a conference in Canada is. American can get $100 of Canadian anything for $75 US. So, there’s that.

Derlva: It’s true and that value extends to our intensives, which are filling up. Jeff Howell? His intensive session is almost sold out. Kim Hurdon’s and Everett Oliver’s are about half filled up, so I’d encourage people to check those out quickly.

Kim: Thanks for the scoop, Dervla!

A leading female voice over actor myself, I am very excited to not only attend V.O. North this September, but also be one of the V.O.North speakers and a panel moderator. I’ll be talking about eLearning, Telephony and Audiobooks and helping moderate a panel discussing ACTRA’s role in the voiceover landscape. Hope to see you there!