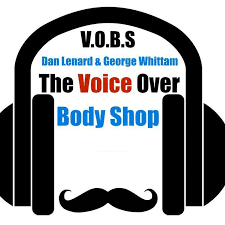 I had a particularly stellar Monday last week as the guest on the LA vlog show, Voice Over Body Shop on Mar 27th, hosted by Dan Lenard and George Whittam. We jawed on about a lot of things voice over talent chat about.

How did I get started? My early days wove back and forth between theatre/film and radio/ TV.

How I became one of the top ten female voiceover artists in Canada. Hard work, marketing, great relationships and always working the craft.

How does the eLearning coaching I do differ from commercial or corporate narration? It’s about helping other voice artists find the best way to help their listener either change behavior for corporate training or retain the info you parlay for academic eLearning.

And if I could only do one type of voice work from now on, what would it be? That’s a tough one as I love them all, but I would settle on commercial voice overs because of the variety and creativity of that particular medium.

Here is the link to my portion of that episode (the 71st) of Voice Over Body Shop.

Vobs.tv is the brainchild of two industry heavyweights. The mightily mustached Dan Lenard, a.k.a. The Home Studio Master, purveyor of not only a great set of frequently used pipes himself, but a leader in sorting out how to set up your own studio, from planning and construction to everything in between, to be able to get voice over jobs from home. The other half of this dynamic duo is gifted  gear guy George Whittam, of the Home Studio Support Squad, affiliated with David Goldberg’s Edge Studio in NYC. Dan and George used to call the show EWABS (East West Audio Body Shop) when Dan lived in Buffalo New York, but when Dan and family moved to the left coast, in 2015, the name change was inevitable.

With over 1600 subscribers on their YT channel, Dan and George just celebrated their 6th anniversary. Weekly, voiceover professionals from around the world tune in to their live stream podcast vlogcast for answers to tech questions, the goods on the latest gear and a guest, sometimes in LA, sometimes via zoom hosting. Guests have ranged from talents like the legendary June Foray (voice of Rocky the Squirrel & Cindy Lou Who) and brilliant Debi Derryberry (voice of Jimmy Neutron) to industry leading voiceover demo producers Cliff Zellman and Uncle Roy Yokelson, lawyers, agents, casting directors and a host of others.

The show was a blast. We had a high number of guests tune in and a lot of fun questions. I had a few requests for voiceover coaching for eLearning afterward too. Add vobs.tv to your list of great voiceover resources. They air every Monday 6 p.m. Pacific. I’ll probably see you there in the chat room!