Trends. Influencer. Trending. Verified. Viral – these are all great examples of the words we use to describe any given flavor of the day around the web—social media, in particular. While the formatting might change, the basic idea stays the same. People want something they can relate to. Share and like, follow, subscribe, save – these words were all chosen for a reason. They mirror us as people, not consumers or viewers. They reflect the things we do, not the things we project. Today, a brand goes viral because people relate to it, and the voiceover advertising trends of 2023 will reflect that.

Most people who left cable for streaming services did so for more than convenience and a binge-able series or two – they did it because they hate commercials. Okay, that’s not entirely true; some hold a special place in our collective hearts. They make us laugh or cry. Fill us with fascination or excitement. They speak to the human side of us, not the consumer or viewer. People don’t want to be pitched to, and we’re always going to invent some new way to ensure we don’t have to be.

There’s a reason for people to pay extra for premium versions of YouTube and Spotify – they even market it in the ads themselves. They don’t want ads or commercials – they want content with the potential to go viral.

Now more than ever, the world has adapted to deliver online content on demand to customers who’ve grown more accustomed to social media platforms than face-to-face human interaction. Marketing videos, eLearning, virtual employee training videos, and any educational content you could think of have all seen a staggering uptick in the last year alone. Everything we could want, or need, is just a click away – only now the problem is finding it through all of the clutter.

The things that catch on are services or products that don’t need ads. Consumers seek them out on their own. They spread it through word of mouth and want to discuss it with each other.

For years, small-to-large brands and companies have been working with YouTubers and social media influencers to promote themselves, and it’s worked out pretty great. Instead of spending a potential fortune in network ad time and production expenses for commercials (which most viewers need more patience for), they sponsor social media content. They go directly to an influencer with a trusted voice who can do it at a fraction of the cost.

Today’s Ads Use Demographics and Human Voices to Connect

Whether people realize it or not, most content creators use voice-over to narrate their unboxing videos, product reviews, and top 10 lists. All this to say, voice-over is the only thing that consistently works with ads, regardless of their shape or size.

For the last century, voice-over narration has remained the one consistent feature of commercial advertisement – and that probably won’t change for a very long time. However, the way voice-over is used is an entirely different story.

Voiceover Advertising Trends – Then and Now

Previously, I wrote about how voice-over has become the new meme on platforms like TikTok and Instagram. Still, the significance of that shift deserves a little more elaboration as far as the advertising world is concerned.

Is the Freelance Economy Growing for Voice Actors?

In a word – yes – but not the way you might think. Over the past two years, consumers have learned one thing – their time is precious. They’d rather be entertained than pitched. They want to be informed over being sold, recommended conversational reads in place of rigid commercials, and made to laugh instead of sigh. People can smell an ad a mile away, and the way we create ads will have to be more reflective of that need. Consumers are sick of commercials that masquerade as content – and they have every right to be.

When ads moved to social media platforms like TikTok, Instagram, and Facebook, users weren’t happy about it, and they still aren’t. There’s nothing more frustrating than scrolling through your social media feeds only to hit a wall of ads. Instead of barreling forward, advertisers must listen to the demand already in front of them. People will watch an ad just as long as it’s entertaining, relatable, and interchangeable.

At first glance, user-generated voice overs might seem like a hindrance for professional voice actors, but really, it’s setting the stage for the next iteration of voice-over ads.

While accessible voice technologies and AI voice assistants have made it easy for anyone with a smartphone to develop their brand voice through social media and video blogs. This trend is merely a precursor for what’s to come. It sounds far-fetched, but hear me out – what we have right now is a unique opportunity for advertisers and viewers to develop a new form of hybrid voice-over commercial together. Something that won’t just potentially be used for one viral video but for millions.

The Future of Voiceover Advertising: How Audio Content Grows Your Business

Because of how Tiktok posts and Reels use sound as a meme, thousands of voiceovers go viral daily. They’re movie quotes, narration, or anecdotes people resonate with, and sometimes it’s a poorly sung parody of a popular song.

Likewise, were advertisers to hire professional voice talent to create personalized audio trends with the express purpose of being shared, tweaked, and remixed by users, the demographics would target themselves. Audiences, customers, and viewers alike all focus on the sound quality of online videos. They listen for businesses that can deliver a script in a way that doesn’t sound like advertising.

What’s better than a voiceover announcer doing audio content for one viral video? A voice actor creating content for thousands of them in one fell swoop. The beauty of this type of voice-over marketing is that consumers would inevitably recycle a brand’s voice-over audio from one user to another, delivering it to each other in scores and actively generating new advertisement material on their own time and dime. Rather than being forced to sit through an ad, users will happily create them on their own for free. An excellent practical example of this might be training content or eLearning.

Photo: Anete LusinaIf the pandemic did one thing right – making education accessible through the web. Most of us already know what eLearning is, but from a marketing perspective, it has been challenging to advertise. Millions of Tiktok and Instagram users already use viral sounds daily to teach each other about their artistic processes, create workplace safety videos and facilitate marketing videos for their small businesses. And most of them do it using the same audio but set different situations and videos. It’s a bold new age for advertisers, educators, and consumers to develop something new that everyone can benefit from.

For the last few years, eLearning has seen a massive spike in usage and social acceptance. When eLearning first became a method of education, consumers weren’t interested. It didn’t feel natural or justifiable because an assumed lack of authenticity came from being somewhere physically. Trends suggest that over the next four years, there will be an increased demand for quality eLearning content that can be applied to several subjects simultaneously.

#1 Fast Food Ads: While the premise of the Burger King video is apparent and meant for comedic effect, we can’t help but want to see where it leads. Pairing his Tiktok with a song about Burger King, this user willingly created content for the fast food chain for fun.

#2 TV Ads: Fans of Breaking Bad are all familiar with the spin-off series, but the audio clips sampled from Better Call Saul have gone viral in their own right. While the voice-over is used by countless users daily, it coincidentally serves as a free TV promo. As enjoyable as the content is, it subconsciously ignites an urge for viewers to go out and stream the series.

#3 User-Generated Product Commercials: One of the most exciting trends from Tiktok is user-generated product commercials. As much as people seem to hate ads, this just goes to show how much users enjoy making them. Whether it’s a quick eLearning tutorial on filming your professional quality commercial or a trend to try out at home, people respond favorably to listening to an ad’s voiceover on repeat. As long as they get to put their spin on it. Here are two examples of user-generated product ads

#4 Travel Ads: Travel ads have been a cornerstone of the voice over ads industry for a long time, and, likely, that won’t change any time soon. It’s one of the most frequently uploaded content across social media, and here are a few examples of how users create viral travel content. 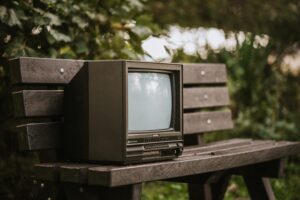