Whether it’s part of how an art gallery presents its latest installation, the method a director chooses to emphasize a script, or the technique a musician uses to weave narration into song – voiceover narration impacts the art world in countless meaningful ways.

As a professional voice artist, I’ve been fortunate enough to lend my voice to museums, documentaries, audiobooks, guided tours, installations, and everything in between. But I’ve never spoken much about how voice over intersects with the realms of visual and performing arts.

The Visual and Performing Arts 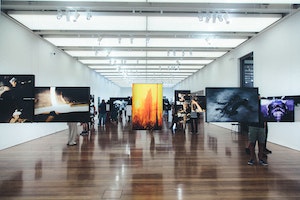 Most of us come across the visual arts in one way or another throughout a typical day – in fact, any time you pass by a building or look at the moldings on your walls – that’s visual art, as is architecture, sculpture, installations, and paintings. Music (all kinds), theater, film, dance – all of these are performing arts.

The easiest way to remember the difference is that visual art focuses on what we see, and the performing arts are a performance. It’s a matter of one being a set and defined act of creation and the other being a short-lived act of experience (live or recorded).

Whichever we focus on, the purpose of the arts is to enrich our lives and add meaning to an otherwise bleak 9-5 existence. Never was the significance of art’s impact more poignant in our collective lives than through the pandemic.

The exploration of unknowable artistic expressions, filtered through the lens of movement and feeling, experiences that flow freely without being confined by fixable surfaces – voice over for the performing arts could not be more distinct from other types of voice work. It’s one of the defining characteristics that separate voice actors from voice artists.

For those who perform voice over for the art world, it’s more than a gig –  it’s a collaboration between artists. It’s about eliciting an interactive experience that ties the creation to its creator and the creator to the crowd. So when we look at how voiceover gets used in the world of performing arts, the narrations begin to behave less predictably and more experimentally.

The Different Kinds of Performing Arts 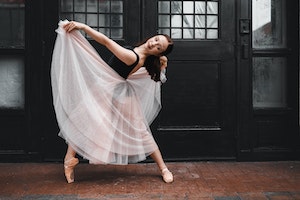 There are five overarching types of performing arts:

Voice Over for the Performing Arts – A Collaboration Between Artists

Sometimes, when we hear voiceover used in the performing arts, it includes music and dance.  Other times, it’s a playful back-and-forth between the narrator, subject, and viewer.

But more often than not, performing arts voiceovers are either live performances, interactive experiences, or experimental art. Both deliver an artistic rendition of ephemeral subjects that span the entire spectrum of human expression. These types of voiceovers aren’t as much about narration itself as setting the atmosphere for the performance.

Voice Over and the Visual Arts 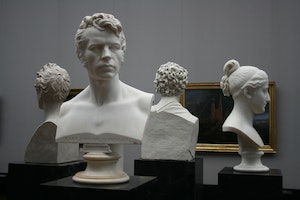 Whether it’s an art installation, interactive narration, part of a live performance, or even the method an art house uses to sell fine paintings – voiceover and the art world are joined at the hip. And it’s through voice over narration that we don’t just hear about the artistic process or theme behind an installation – we feel as if we’re a part of it – and always have been.

Voiceover adds extra levels of sensory depth to the entire experience and allows viewers to completely immerse themselves in whatever worlds an artist intends to project. From portraits to filmmaking, sculpture to architecture, the world of visual arts is as broad and unique as the artists who inhabit it. When we look at voice over for the visual arts in contrast to commercial voiceover, the most wholesome differences lie in the intent, theme, and audience.

The Different Kinds of Visual Arts

All in all, there are ten kinds of visual arts, each with its own unique facets, quirks, and styles: 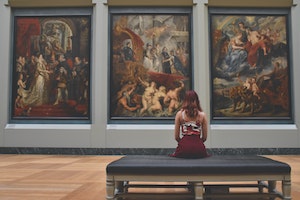 If you’ve ever been to a museum or art gallery, there’s a good chance you’ve heard voiceover used as part of the interactive tour. It’s no different for art installations and private showings.

What’s incredible about how voiceover gets used for art installations is that it offers us the luxury of learning everything about a painting (and the artist who made it) as we gaze upon it for the first time. We don’t just hear the backstory, but the intent, meaning,  process, the type of brush used, or even the reason they used none.

Through the power of voiceover, every one of us gets to be an expert in the exact moment we observe an artist’s work. We’re given insights about the artwork or artist and offered a chance to immerse ourselves in the art like never before. We get the opportunity to close our eyes, picture how each brush stroke lent itself to the canvas, and listen to the entire artistic process in exquisite detail.