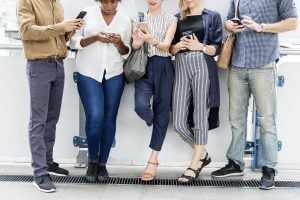 Say “animation” and most people think of  series like The Simpsons or Family Guy. Both are definitely hilarious animated TV shows (and contain equally fun voice over characters). But the kind of animations that lengthen website visitor time and unlock your social media super powers are bite sized, often fun snippets that showcase you or your company.

We’re talking about animated videos for your brand. The type of video that, once paired with a voice-over narrator, is shareable on social media. The reason behind their popularity is simple: we live in a world now where storytelling is everything. People don’t just want to buy a product or service – they want to buy into a brand too. They want to know the brand’s character, story and hear the brand’s voice. And that’s exactly where animations, matched beautifully with a voice-over artist, come into play.

I’ve worked on hundreds of this type of animation, and apart from being fun to work on, I also see their value. The internet is packed to the brim with wordy, fluffy content. So now, social media users and agencies are striving to put stuff out there that’s different from the rest. Animated videos are a perfect example of visual and voice coming together as one, so it’s kind of a no-brainer that this is what more and more brands are seeking.

Storytelling is Key to Great Voice Over

I read an interesting article in Psychology Today that talks about the importance of storytelling and why it’s become such a thing on social media now. The author says that humans have always been storytellers. Since the beginning of (our) time, we’ve used stories to both educate and entertain. Whether by rock paintings or poetry, it’s always been a thing. It’s just that now, that thing has evolved into animated videos with voice-over characters.

The other thing to consider is that as humans we’ve also evolved to want more from our storytelling than rock paintings. It’s not so much about what the story is anymore, but how it’s being told. And that’s where commercial voice-over artists like myself come into play. I take on your brand’s character and tell your story to your intended audience in a relatable way.

Not Just a Pretty (Sounding) Video

Not only do animated videos sound and look good, but they also achieve quite a few goals in the process. An article on Medium.com suggests that whether you’re trying to explain how something works, bring in new customers, or simply reiterate a fact to the database you already have, an animated video is the way to go.

Explainers and videos are important on websites, in fact, people spend 100% more time on a page that has a video. Surprisingly, 59% of senior executives would rather watch a video than read text.  These senior executives aren’t videophiles out of laziness, but rather because of pressures of time (or lack thereof). Packaged, visually and vocally appealing info is quicker and easier to digest than a wall of words.

Another great benefit of animated videos, is their shareability on social networks like Facebook, Instagram and Twitter and their ability to heighten your Google ranking. Perhaps the biggest bonus of all is that animated videos do exactly what storytelling was created for: to entertain and educate, at the same time. They use funny characters with their own personified voice-over narration, unique animations, and a quirky and offbeat tone. And by doing so, they capture your target audience and hold their interest long enough to get the point across.

To show what an end result should sound and look like, I’ve included a few examples of animated videos I’ve worked on below. Sometimes friendly, sometimes quirky, they’re always effective.

Eventsage.com is an online event planning service, and this animation educated people on why their service was needed. In this video, I helped paint the picture of someone getting super stressed with their own event planning. More importantly, I explained why they should turn to a professional service for help. The emotion we were playing on here was stress, which is harder to convey in text, yet risks coming across like an infomercial if portrayed by a screen actor. The emotion in my voice paired with quirky and clear cartoons, however, captures and resolves it rather nicely.

Interconnected systems by Dun & Bradstreet aren’t necessarily the easiest thing to explain… but we achieved it in this  animated video matched with my kinda quirky voice-over narration. I particularly loved the clean good puns in this explainer video. If you get to the ‘nutshell’ part, you’ll see what I mean.

This video I worked on for Xpertdoc isn’t necessarily as quirky or funny as other brands’ animations, but it is still an very effective tool for their business. It’s clear, it’s concise, and it informs the viewer of the service in an engaging and easy to follow way.

Need Help Telling Your Own Story?

In my time as a voice-over artist, I’ve voiced thousands of characters. Not necessarily always the type from The Simpsons, but brand characters instead. Whether you’re looking for a tone that’s serious, or funny, or something in between, performing great explainer video voice overs is one of my personal super powers.

Looking for a voice-over talent for your own business or brand’s animation? Contact me and let’s chat about giving your project a voice.